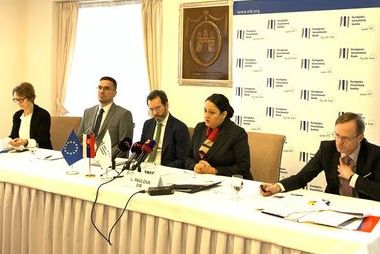 Bratislava, February 7, 2020 - The European Investment Bank, the Slovak Ministry of Finance and Slovak Investment Holding have announced a landmark investment of €40 million in a new Slovak fund aimed at supporting innovative small and medium-sized enterprises. The Venture to Future Fund will provide capital and quasi-capital financing to Slovak companies from March 2020.

Innovative and technological Slovak companies can look forward to a new round of equity financing. It will be provided by the Venture to Future Fund (VFF) under a licensed management company - Slovak Asset Management (SAM) – which belongs to the Slovak Investment Holding group. VFF will source its investments from state financial assets, recycled funds from the preceding EU budget period, SAM’s own resources and EIB investment funds.

The Slovak Minister of Finance, Ladislav Kamenický, declared: “The investment from state financial assets will support innovative and technological enterprises, which are pivotal for the future of the Slovakia’s economy. The Finance Ministry’s contribution will thus not only stimulate the capital market in Slovakia, but also alleviate the Slovak brain drain to external markets. I am delighted that the resources of the Finance Ministry, the EIB and SIH have been combined in such an exceptional initiative.”

The European Investment Bank has contributed a total of €10 million to the VFF. In addition, the EIB has actively participated in the setting up and structuring of this fund, thereby enabling VFF to reflect Europe’s best market standards. EIB Vice-President Lilyana Pavlova stated: “VFF is the first fund of its kind. In Central and Eastern Europe, no other fund managed by a public investor has received an equity investment from the EIB to date. Our support was possible thanks to the market orientated nature of this fund, but also due to successful collaboration between the EIB and SIH on several projects in the past.”

VFF is intended to help SMEs which both demonstrate strong growth potential as well as prospects of expanding into European or global markets. SIH’s CEO, Ivan Lesay, stated: “This type of companies often migrate from Slovakia and other European countries to the US and other foreign markets, precisely due to a lack of domestic investors. The Slovak capital market is evolving, but it still fails to satisfy financial needs of domestic companies. VFF should help addressing this investment gap.”

VFF Investment Manager Matej Říha commented: “Although VFF relies on public investment funds, thanks to the EIB our fund is set up in a way that it operates on market-based, commercial principles. We aim to support strong, promising companies to ensure that our investors receive adequate market returns.”

SIH is a 100% state-owned joint stock company. Its primary goal is to support strategic public and private investments in Slovakia in the areas of infrastructure, energy efficiency, waste management, social economy, health, cultural and creative industries and small and medium-sized enterprises. SIH draws on European Structural and Investment Funds to fund its investments. Projects are financed exclusively in repayable form, i.e., using financial instruments rather than grants. The newest member of the SIH Group is Slovak Asset Management. With an alternative investment funds license from the National Bank of Slovakia, SAM’s objective is to achieve commercial appreciation of its investors' resources.

Information about the European Investment Bank

The European Investment Bank is the bank of the EU that provides lending, guarantees and technical assistance for investment projects both within and outside the EU. Its main priorities lie in the realms of innovation, small and medium-sized enterprises, climate and infrastructure. The EIB is the largest multilateral bank in the world. Its shareholders comprise EU Member States. The EIB is the majority shareholder of the European Investment Fund and both entities constitute the EIB Group.