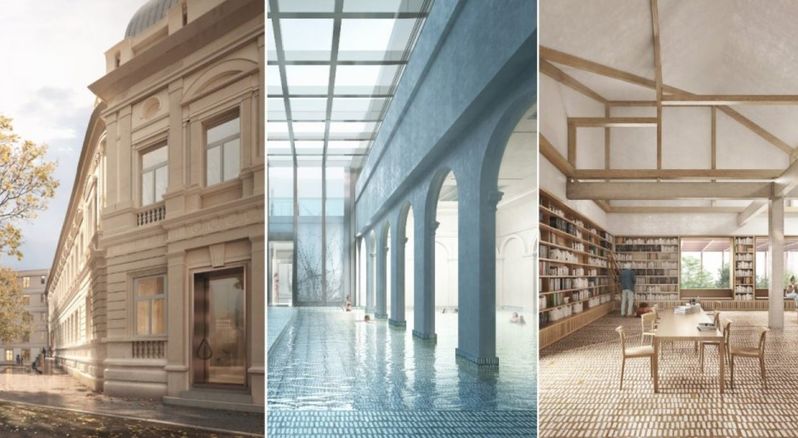 Bratislava, November 29, 2021 - After the city council, the Antimonopoly Office has approved the establishment of a commercial company for the Grӧssling Spa. By signing the contract today, a company of two partners was established, which will ensure the reconstruction and operation of the Grӧssling Spa and the Grӧssling Municipal Library. The city has acquired a partner who will partly help with the financing so that the city budget is not burdened.

The partners, the capital city of Bratislava and the state investment fund Slovak Investment Holding (SIH), through the National Development Fund II, have concluded an agreement establishing a commercial company for the Grӧssling Spa and Municipal Library.

The amount of the capital city's contribution to the company's share capital is € 850,000. The capital city will also contribute the real estate of the spa and adjacent land to the company. Thanks to the investment from SIH, the need for project financing will be reduced and at the same time it will enable the newly established company to obtain a bank loan for the remaining € 10 million, as the project's own resources will be increased. Insofar as the capital city's contribution is limited, the project will be financed primarily from external sources.

A project has been drawn up for Grӧssling and a model has been set up so that with a daily visitor number of approximately 500 people, the spa will be able to earn money for its operation and the gradual repayment of the bank loan.

"I am pleased that SIH is the partner for such a project, which, unlike investors from the private sphere, also follows other than commercial parameters, such as the development of cultural institutions in the city, which are extremely important for the city and its citizens," said the mayor of the capital Matúš Vallo.

"The restoration of the Grӧssling Spa is an example that it is also possible to do self-sufficient and sustainable projects in the field of culture. We are delighted that SIH's investment will help bring this iconic Bratislava landmark back to life," said Peter Fröhlich, CEO and Chairman of the Board of SIH.

Grӧssling Spa is one of the last remaining unrestored national cultural monuments in the centre of Bratislava. It is an inseparable part of the history of the capital and an iconic place for the citizens of Bratislava. The renovation will take place between 2021 and 2026, with the spa expected to be operational in 2026.

Work is already underway to gradually preserve the original precious parts of the spa, such as the restoration of the historic chimney. Architects from the Italian team OPPS Architettura, which was successful in the architectural competition, are working on the project documentation. In order to be able to subsequently start reconstruction work in the cleared building the first demolition phases are also underway, this involves removing the non-load-bearing internal layers of the structure, which have been gradually added since the end of the Second World War and have no historical value.